The Peregrine Falcon is known and admired around the world for its incredible speed, rarely surpassed by any other bird. These crow-sized falcons reach speeds of up to 180 mph in pursuit of prey. The worldwide peregrine population is more extensive than any other bird—they are found in North and South America, Eurasia, Africa, and Australia, preferring open country, high mountains, and tall buildings to construct their nests on ledges 50-200 feet off the ground. They mate for life and usually return to the same nesting territory each year.

Not long ago, the peregrine falcon faced an uncertain future. Classified as “Endangered” by the NYS Department of Environmental Conservation (DEC), they were eliminated as a nesting species in the early 1960s due to the discovery of pesticide residues in their prey. The release of young peregrines bred in captivity in the 1970s and 80s led to their return in 1983, nesting on two bridges in New York City. The population grew steadily and by 2003 there were close to 50 pairs. New York City may now have the largest urban population of peregrines in the world. Nests can be found on every Hudson River bridge south of Albany, as well as several bridges further upstate and on cliffs in the Adirondacks.

Their resurgence has been so successful, the DEC has proposed reclassifying the peregrine from “Endangered” to “Special Concern,” still warranting attention but no longer threatened or endangered. Green Chimneys Wildlife Specialist Paul Kupchok, a member of the statewide falconry commission that has been advising the DEC on the reclassification, is one of many devotees awaiting the final decision to be made.

The Wildlife Center at Green Chimneys is home to over 50 permanently injured or imprinted birds of prey. Licensed by the Department of Environmental Conservation and the U.S. Fish & Wildlife Service, the Wildlife Center rehabilitates and cares for diverse species. Our goal is to release as many animals as possible back into the wild. And as part of a 75-year approach to therapeutic education, Green Chimneys School students help to care for the animals. Learn more about wildlife rehabilitation and education 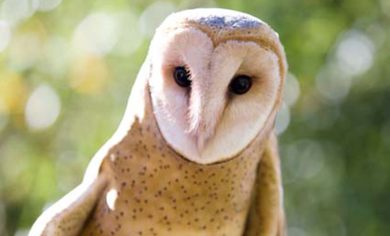 Our permanently injured birds of prey are part of over 300 animals that help students with special needs make connections, care for others, and develop essential life skills. By sponsoring a Green Chimneys animal, you are directly helping with the expenses associated with proper animal care, including veterinary and food costs. And, sponsoring an animal can be a great gift for someone you love! Explore how to Sponsor an Animal →