“Green Chimneys Helped Us Advocate for Our Child’s Needs”

This parent perspective was provided by Irene Pizzo. 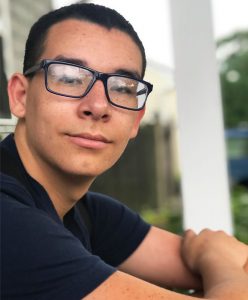 The last month of school, we sat and picked out classes for our son’s senior year. It all seemed surreal. This is something we never thought we’d be doing but thanks to the dedication and support of Green Chimneys we are. Green Chimneys gave our son Dennis a chance at success.

Three years ago Green Chimneys helped us advocate for our child’s needs to return to district. We started that year very unsure if we had made the right choices. At one point I even said to our district special education director, “So where do we go when this doesn’t work?” But Dennis showed us that he could do it. It wasn’t easy at first. It had been four years since our son actually lived at home full-time with us, and had been seven years since our son was in a regular school setting.

Returning to Our Home District for High School

The first week of 9th grade was very overwhelming for all of us. But we had many supports in place for him at school and at home. He was welcomed each morning at the bus by his one to one and the school psychologist. The psychologist would remind him each morning of what to expect for his day and that if he needed her she was there for him. His teacher truly met him at his level, which was a godsend. Our son was very behind academically because of all the years of behavior issues before Green Chimneys.

As the first quarter came to an end, I met with our special education director. As I walked in she looked up at me and said, “See! Aren’t you glad you gave him a chance?” YES!!!! Yes, I am glad I gave him a chance because my son took all those skills and coping mechanisms he was taught at Green Chimneys and ran with it.

Dennis has been so successful and has come a long way. He joined Best Buddies his first year home. The program helped him navigate how to interact with students not in class with him. He even represented our district at a conference for Best Buddies and spoke about the benefits of being part of their group. That June our son took the Algebra I and Living Environment Regents. He didn’t just pass them. He did well on them!

The following year, in 10th grade, our son tried out and made the Boys Bowling Team. We were very unsure about how this would impact him. The longer days, the interactions, and the desire to do his best were stressors we weren’t sure he’d handle well. Not only did he handle these stressors, he loved it. He learned a lot from his peers and they learned a lot from him. Dennis learned to genuinely be part of a team. His teammates embraced him and watched out for him. It was beautiful for us to see after years of our son being the outcast because of his behaviors. We saw true kindness in the way these children helped our son learn. In his 10th grade year we also saw an amazing gain in his reading level, thanks to adding a one to one reading specialist to his support team. That June he passed the Earth Science Regents and received a good grade but wanted better. This was the first time we saw our son place a value on his education. Before he did it because that’s what we told him he had to do. He worked very hard that summer in school to be prepared for 11th grade. He was interested in reading books on his own and learning about what was to come in September.

This school year we have continued to see our child grow as he splits his days between our school district and BOCES. He wanted to go to BOCES to study Digital Media Production. We were very nervous because he doesn’t like change and stresses over transitions. He took it like a pro from day one. Dennis absolutely loves the program and talks about it with excitement. More importantly he is excited and is gaining a trade that he can use in life. He continues to be successful academically and is making gains in his reading levels.

I’m not going to tell you it’s been easy, I’d be lying. He still has outbursts but they are very few and far between. When they do occur, the intensity is mild compared to what it was and they don’t last long because he uses his skills to get through them. But it has been the most enriching and heart-filling thing to watch our child be so successful. And we know that our son would not be where he is if it wasn’t for the help he received at Green Chimneys.

This piece originally appeared in the fall 2020 issue of our newsletter, The Gazette.

At Green Chimneys, we understand that families are the experts when it comes to their children. It’s more than a family-centered approach to therapeutic education. We believe that the partnership between families and our staff is essential to helping each child achieve positive growth and a sense of well-being. Learn more about Green Chimneys’ therapeutic day school and residential treatment program