In the last few years, camels have gained popularity with human-animal interaction professionals who recognize their versatility and ability to bring unique learning and therapeutic benefits in a variety of settings.

The Sam and Myra Ross Institute at Green Chimneys will host a workshop designed to help camel owners enhance existing skills and explore ways of incorporating camel interactions into programs with clients or the public.

The first two days of the workshop will focus on hands-on training and camel handling practices including leading, riding, ground driving, medical restraints, general handling, and husbandry of camels. The third day will incorporate Green Chimneys students and staff, both for their learning benefit and to allow camel owners to observe ways in which interactions have successfully been incorporated into Green Chimneys’ programming for recreational, therapeutic, and educational gains.

This workshop is geared toward private camel owners from the Northeastern United States looking to benefit from hands-on training. Those currently working with camels may also benefit from demos and discussion of how to safely lead camel-assisted activities with humans.

Since 2012, Green Chimneys has incorporated two Bactrian camels into nature-based programs for children with social, emotional, and behavioral challenges. As a special education school and residential treatment center, Green Chimneys is recognized worldwide for innovative approaches to education and nature-based programs. In the fall of 2021, Green Chimneys welcomed a Dromedary camel into the farm family. The trio of camels, along with the 300+ animals that make up the Farm & Wildlife Center, are an integral part of the educational, therapeutic, and recreational offered at Green Chimneys School. Now celebrating its 75th year, Green Chimneys continues to be a leader, advocate, and educator of human-animal interactions (HAI). Through The Sam and Myra Ross Institute, Green Chimneys serves the HAI community by conducting ongoing research initiatives, hosting conferences and workshops, and fostering the future of HAI through the Henry J. and Erna D. Leir Global Internship Program.

Given that this workshop is hand-on, there is limited space available for humans, and even more limited space for camels. Registration is first-come, first-served. A waiting list will be made when the limit is reached.

*Registration fee includes lunch on Sunday, Monday, and Tuesday as well as one casual dinner on Monday. Complimentary coffee, tea, and water will be available throughout each day.

Doug Baum: Doug Baum has owned and operated Texas Camel Corps since 1997. Business activities include guided camel treks in the Big Bend region of Texas, guided tours in Egypt, Jordan, Morocco, India, and Kenya, and annual public education programs with his family’s camels from Mississippi to Arizona and New Mexico, and across Texas. Baum is also an award-winning documentary filmmaker and he and his camels have been featured in Texas Monthly, Texas Highways, ARAMCO World magazine, and National Geographic Adventure.

Terri Lindley: Terri started riding horses in 1970 and became a professional horse trainer in 1979. While riding racehorses from 1982-2000, Terri expanded her training skills and began working with all breeds, all disciplines and addressing problem issues with horses. To date, Terri has started approximately 3000 horses under saddle. In 2010, Terri took the leap into working with exotics; first a camel, then a zebra, then a steer. Her expertise has diversified far beyond those species, and Terri has since established herself as an entirely mobile trainer for the last 8 years. My philosophy is creating soft, confident, safe animals, with refinement in skill set, and teaching owners/handlers proper feel, timing, release, energy and intention.

Chris Hahn: Chris has an academic foundation in Neuroscience and Behavioral Biology from Emory University. For the last five years, Chris helped to establish camels as an integral part of Green Chimney’s nature-based programs encompassing education, therapy and recreation. Together with licensed therapists, he co-facilitates camel-assisted therapy sessions and has developed recreational camel-based education programs for children and mentors other staff in working with camels. Chris supports Doug Baum as a handler on camel treks through the Chihuahuan Desert of Southwest Texas. Chris firmly believes that the willingness to connect with humans and sensitivity to energy/body language make camels ideal partners in diverse human-service settings.

Nick Morrow: Nick Morrow graduated from Utah State University with a Bachelor’s degree in Animal, Dairy, and Veterinary Science with an emphasis in Bioveterinary Science. He also received a minor in Biology and Chemistry. It is anticipated that he starts vet school at Utah State’s School of Veterinary Medicine in the fall of 2022. Aside from his schooling, Nick is also the owner of a mobile animal care and training business called Hooves, Humps & Horns. He trains exotics, livestock, and horses, around the United States.

For your convenience, we have arranged for an attendee rate of $112 per night at the following hotel:

To book at this special room rate you must either:

This hotel is roughly 7 miles and about 20 minutes (depending on the time of day) from Green Chimneys’ Brewster Campus. All attendees are responsible for their transportation to and from the workshop.

As a special education school and residential treatment center, monitoring of state, county and our own COVID-19 mitigation protocol is ongoing and with the safety of our students at the forefront. We require all workshop attendees show either proof of vaccination or proof of a negative PCR test taken within 48 hours of the event in order to attend. Proof can be shown at check-in, or in advance by sending a scan or photo of your vaccination card to Trent Lauber via tlauber@greenchimneys.org.

At this time, mask-wearing is required at all times indoors and when a distance of six feet cannot be maintained outdoors. All applicable protocols will be communicated to attendees closer to the event.

Getting to Green Chimneys

General information on getting to our Brewster Campus are available here Camels bring something different to the proverbial table as they aren’t trained the way horses or dogs are. Incorporating camels into therapy sessions can provide unique situations for students to learn, practice skills, and grow. Learn more → In the fall of 2021, Green Chimneys welcomed a third camel named Bunni into the farm family. See how our students and the trio of camels are working together. More → 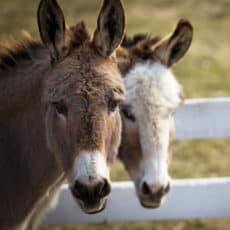 Donkeys are amazing animals that provide important lessons for our students. Gracie and Reba, who have lived here since 1996, are loyal friends — to each other, and to our students. This pair dislikes being separated, and if they lose sight of each other, they’ll call out until someone brings them back together again. Gracie and Reba are shy, and only respond to humans who show them kindness and patience.